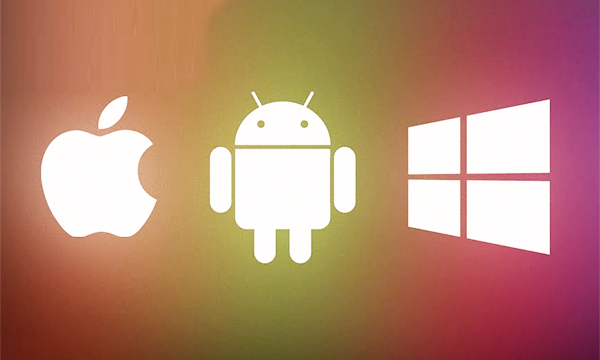 Home » Android vs ios vs Windows

Imagine you are standing in a smartphone market and you are buying your first smartphone. Obviously,you must be so excited to be the part of the folk who lead the lives through their smartphones or we can say smartphones rule them. So,you must be having a picture in your mind regarding the specifications of the phone you want. It might include awesome camera,good battery life, high resolution display and an attractive design. Well,these are the features most of us look for in a smartphone. People go for hardware features,mostly giving less concern about the software their phone is going to work upon. This is most probably because of the fact that most of us don’t plan a phone. In general,we go to the shop,see a device there and tend to buy it if the salesman explains it well enough to convince us for buying.

But there can still be a better approach of buying a phone. You plan your phone,that is,first sum up your requirements and then go looking for them. Among the prime necessities,the software core must be present. This is the aspect which is going to be the most essential one but still it remains the least concerned one. Now,since there are options available for softwares also,so it becomes again difficult to decide and shall we rely on the salesman man again? The answer is no. Here,we provide you with  the features associated with the three operating systems used in the smartphones, Android,iOS and Windows.

Android and Windows have gone through various makeovers but more or less, iOS has remained same in terms of design and interface. All the three operating systems get you a lock screen that displays notifications and once unlocked, an app centric home screen appears.

Android did get biggest change in it in 2004 when Lollipop was launched. It added a number of animations and a bit of  gloss to almost every feature. Widgets are the special feature in Android and have been a mainstay since the first version of Android.

Apple iOS is the simplest among the three with slick animations which give quite a sense of depth until you have got hell loads of apps. Windows and Android are featured with tray apps to manage too many of apps which Apple lacks.

Windows home screen is a tiled grid and apps are presented in form of different coloured tiles. The added feature here is the level of customisations offered. Also,you can dock the phone and get switched to a desktop interface.

This feature makes the real difference between the three as apps and app stores can build as well as destroy an operating system. The phone might have a stylish look and sleek interface but if it compromises with the apps, it is not worth.

The three operating systems have their separate app stores namely The Play Store for Android, The App Store for iOS and Windows Store for Windows,where you can download the apps of your choice and as per your requirements.

Still,Windows has been ruled out in this aspect as compared to Android and iOS as it trails way behind both when it comes to app variety and app quality.

Though iOS still dominates the markes of technologically advanced countries, still Android is the one which is fastest growing. The developers all over the world are now targeting the Android phones. The Play Store has higher number of free apps as compared to the App Store inspite of the fact that iOS apps are easier to develop and there has been a trend that apps appear there first. iOS still leads in terms of variety and quality but the future seems to be in favour of Android.

The Play Store  is a better platform to get an appthan the App Store and Window Store. Android is also not opposed to third party app stores unlike the two and remains more geek friendly and open.

There are some remarkable features associated with all three different operating system available.

iOS has its Continuity,which is amazingly handy and allows your different Apple devices talk to each other and confirms their core apps to remain connected. You can start a text message on your phone and end it on your MacBook. Also,your MacBook can receive the calls once the phone is out of reach. The feature works quite well and makes the gadgets quite handy as well. So far, Android is still not seen doing any sort of this.

Windows comes with its Continuum,which is isn’t similar to iOS’s Continuity and has advantages of its own. It allows to directly plug your phone into a monitor and get a PC like interface once you get connected with to a keyboard and a mouse. This feature is seemingly cool but it has a limited real world value,with the present hardware and goes only for a couple of core apps.

Both Android and iOS have free messaging apps namely Hangouts and iMessage,though Hangouts is available for iOS also and Windows has Skype for similar chat functions but not for SMS. Also,fitness apps are available out there,Google Fit ,Apple Health and Microsoft Health which help you monitor the heart rate etc while working out.

Battery life is a huge factor for the smartphone owners and is a pretty much of a concern too. But it is difficult to determine which one of three is best here because there is no common hardware.

Android has its battery saver options installed from the Lollipop version onwards and allows you to see the battery life remaining and the battery usage by each app. Also,you can turn off the background usage for specific apps once the battery life hits a certain level by switching on battery optimisation mode.

Windows also comes with its battery saver options which function similar to those of Android.

Apple also introduced the same and also the power saver mode named as Low Power Mode in iOS 8 and afterwards versions. But it seems to lose the battles here because it might be using most out of the battery per mAh rating,Android devices come with much bigger batteries that easily overrun the iOS devices.

How To Empower Your Business With Custom Software On A Budget