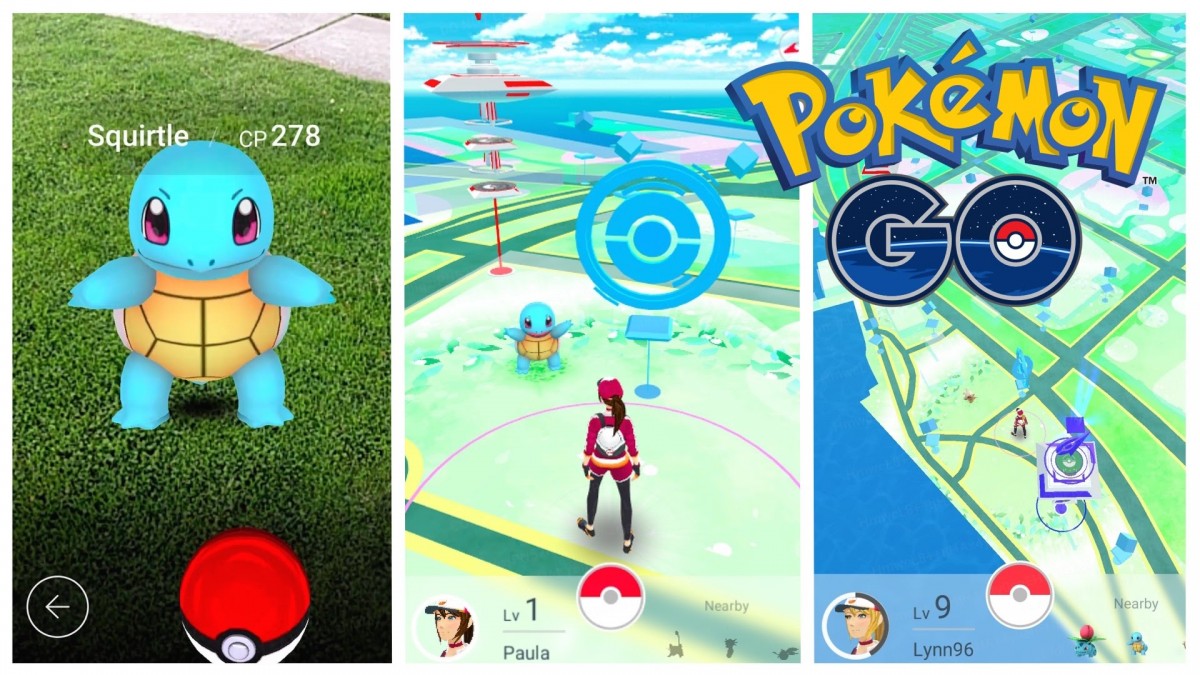 Recently the world has been plagued with a very new kind of epidemic,Pikemania, which is characterised with Pokeballs,backward hats, candy,lucky egg,medals amd a wild Pokemon. The only disease world wants to get is tons and tons of rattata. People all over the world were suddenly seen roaming on the streets,parks and spending freaking much time outside their homes and offices. The reason is even more awesome than the happening itself . The people are out there for catching Pokemons , playing the game Pokemon Go.

Pokemon Go is a location based game developed by Niantic and it was launched in July 2016 and has gone viral since the time. The game is compatible with iOS,Android and Apple watch devices as well and includes catching creatures. Actually, the players use the GPS facility of a mobile device to locate,catch,battle amd train virtual beings which are called Pokemons. The creatures appear on the screen as the player moves in the surroundings. Pokemons pop on the screen as if they are located in the real world with location same as that of players. The players are featured with an avatar which is the actual doer for the game and with the help of geographical maps and current locations,he plays the game further. The map features Pokestops and Pokemon gyms which provide avatar with the required items for the game such as eggs,berries and Pokeballs and locations to battle. Pokemons have different species with various different dwellings such as water type Pokemon is found around a water body and players need to go there actually to capture them. Once captured  the Pokemon is the possession of the players. When general Pokemons are encountered,a screenshot is taken and for a wild Pokemon,a Pokeball is required to capture it. The players are awarded upon catching and the prizes can be used to evolve more pokemons and other battle equipments. The ultimate goal is to complete the required 151 Pokemon entries in the Pokedex,which is Pokemon encyclopaedia.

Coming to the technological aspects, the game is a augmented reality game. It provides the game with the view of the real world environment which is a mediated reality. It means that reality is modified and simulated and is conventionally in real time. This technology makes the surroundings of the user interactive and digitally manipulable by enhancing the cognisance of reality. It requires sensors,processors and display as well as input devices and thus can be embedded within modern smartphones as they contain camera as well as sensors. Pokemon Go was developed by Niantic but the original concept was coined by Saturo Iwata and Tsunekazu Ishihara in 2014 itself. The beta version of the game was released in 2016 which was initially Japan exclusive,followed by releases in Australia, New Zealand and United States. The full length version was released in July 2016 and was welcomed with open arms all over the world. The company promises to launch the player vs player battles also in the coming future.

The game has been developed to be played upon smartphones,tablets and Apple devices and the basic features required are Android version 4.4+ with strong internet connections and GPS services and iPhone 5+ with iOS 8+ version. The rooted and jailbroken devices are not supported. Also,some additional devices such as Pokemon Go Plus has been developed by the associated companies which enable the players to do certain actions without their smartphones also. The device vibrates itself whenever a Pokemon or a Pokestop is nearby and the player can press the apt buttons to capture the identified pokemon and to receive the items as well from the store.

The response to the game was overwhelming as the company share prices rose to an initial 10% and rose as high to 50% by the end of the month with more than 500 million downloads all over the world. The critical response was also quite amazing as the game experience was claimed to be enjoyable and promoting the much needed physical exercise. It was even acknowledged as the best secret exercise app and people modified their daily routine to spend more time catching Pokemons and thus doing their workouts. The journals and the newspapers flooded with the articles stating that it was the “greatest unintentional health fad ever” and thanking the developers to get people moving which has recently been a bit impossible with the extremely busy work schedules and life.

The critics put forward negative aspects of the game as well. Frequent crashes has been cited because of immense load on the server, the game lacked in polish and depth , required much of data and other technical issues. It was also accused that the game required full access to the Google account and was capable of reading emails also when signed in the game. The players also said that the game is also confusing and quite complex to play in the beginning and they required to go through multiple videos and articles initially to get a notion about the seemingly simpler game. The game has also created social problems. Several accidents have been reported as the player was extremely engrossed in capturing pokeman and thus failed to pay attention to the driving or road crossing. Public nuisance has been observed at numerous places where more pokemons were claimed to be found and the situations has been really difficult to handle at times. Many countries have encountered discussions in their legislations on the same and laws have been formulated as well.

Inspite of all the drawbacks associated, this game initially aimed for 10 year olds has been quite a sensation and it overtook the social life, of ours as well as the social media. The game has been awarded with 5 Guinness World Records for being the most downloaded game, earning the largest sum of revenue, fastest team to get 100 million dollars through a mobile game and topping simultaneously most of the international charts for a mobile game in first month. The game might not be that good but the gaming experience is freakingly fantastic.

Android vs ios vs Windows